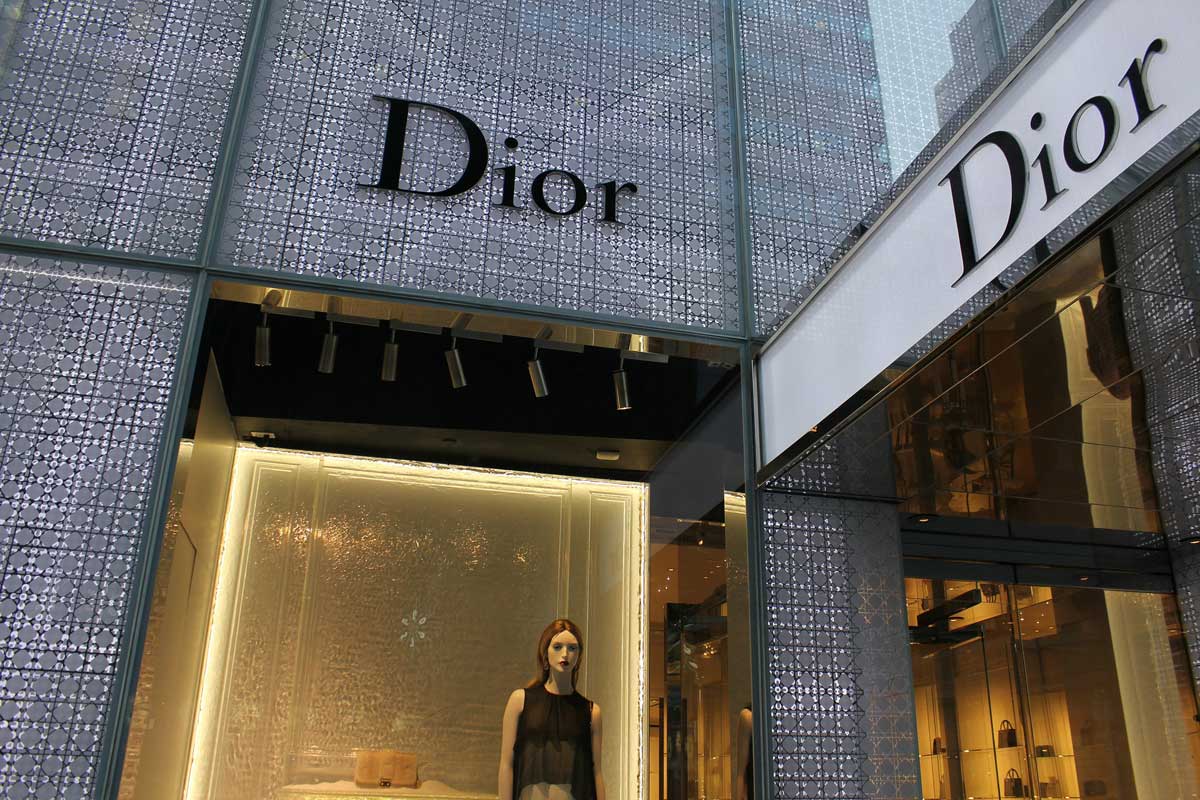 Christin Dior – a brand that stands for French elegance, luxury and design like no other. The fashion house does not only make prêt-à-porter, but also the extremely elaborate haute couture since the beginning of its time. With different designers Dior experienced different epochs and since 1946 has been inspiring the fashion world and especially stars and celebrities, such as Victoria Beckham, supermodels, such as Naomi Campbell, or It girls, such as the Kardashians and Paris Hilton.

In 1946 the then 41-year-old Christian Dior opened his fashion house of the same name in Paris. He learned his unique style from Lucien Lelong and revolutionized the fashion world of the time in just 10 years with his NEW LOOK. The Frenchman quickly enjoyed great success and a few years later launched Miss Dior, the women’s perfume that is still famous today. From the 1950s onwards, Dior began to print his name on his exclusive fashion, accessories and bags and quickly became the outfitter of the Hollywood society. Stores on New York’s 5th Avenue and Paris’ Avenue Montaigne followed and at the same time, with the launch of the first beauty line, the then young Ives Saint Lauren became Christian Dior’s assistant. After Dior’s death, Saint Lauren took over the creative direction of the house, but had to resign after a short time when he was drafted into the military. Over the years, the traditional house still experiences many highs, such as the introduction of new lines, e.g. men’s fashion, but also lows, such as some takeovers and bankruptcies. From 1988 onwards, LVMH slowly took over the company and designers such as Hedi Slimane or John Galliano revolutionized the fashion Dior’s once again. Today, under the creative direction of Maria Grazia Chiuri and Kim Jones and fully owned by LVMH, the company is one of the largest fashion groups in the world. The fashion world and stars love the French label and the designs of the brand are iconic.

From extravagant creations to enchanting locations – at Dior the fashion shows are diverse and unique. The following three videos show the three most worth seeing fashion shows of the luxury label.

2000 extravagance and the old supermodels at John Galliano

The show is definitely one of the older Dior shows, yet one of the most worth seeing and exciting shows the fashion house has ever presented. Back when John Galliano at Dior entertained the fashion world with his extravagant couture creations and delighted Dior fans every time. With today’s fashion, which tends to be minimalist, this video is a cool reminder of the fashion world of the 2000s.

Magical moments at the spring-summer show

The Dior Spring-Summer Show 2020 was the eye-catcher at the Fashion Week. The location was reminiscent of a dark fairytale forest and the music harmonized perfectly with the whole ambience. Dior enchanted its audience and the fashion world with a unique fashion show.

The Kardashians and J Balvin – Colorful Dior Show in Miami

The Dior Homme Pre-Fall Show of these years was eagerly awaited by many fashion fans. Location of the fashion show was a unique building in the middle of downtown Miami. Numerous celebrities like Kim and Kourtney Kardashian, Orville Peck or J Balvin flocked to Dior and were thrilled by the colorful collection as well as the equally extraordinary location, which was green and decorated from top to bottom with Dior lettering.

Secret and exciting: Campaigns with a story

The luxury brand’s campaigns are considered to be the most clicked and seen in the world and there is a specific reason for this: the campaigns are absolutely unique, often have a message and trigger emotions in the viewers. Three of Dior’s top campaigns can be seen here.

Drama and Action with Natalie Portman for MISS DIOR

The campaign for Dior’s new women’s fragrance “MISS DIOR” is a short but equally dramatic mini-film in which the American actress Natalie Portman plays a young woman who is in a love crisis with her boyfriend – Sia’s mega hit Chandelier is running in the background. The clip is emotional and exciting at the same time and has received over 100 million views on YouTube.

This campaign for Dior’s perfume J’adore is like something out of a James Bond movie. Charlize Theron in the leading role looks like a Greek goddess and regulates herself in a golden thermal bath. In the background Kanye West’s hit Flashing Lights is playing. The campaign is one of the most seen and not least best advertising campaigns ever.

The video of the campaign for Dior’s Ready-To-Wear Autumn/Winter 2017/2018 collection features a group of young women with strong styles and personalities. All of the women are individual in their own way and together radiate a wonderful and powerful image of the typical Dior woman. The idea and and implementation harmonized in a fascinating campaign of the French luxury house.

The French luxury label stands for luxury and design. Stars and influencers love Dior as much as fashion fans all over the world. The brand’s fashion shows always feature a host of celebrities, such as the Kardashians, Rihanna, Cara Delevigne or J Balvin, who don’t want to miss the spectacle.

Bella Hadid and the Kardashians – star-studded crowd in Miami

Whether Kim Kardashian, Bella Hadid, Winni Harlow or Kate Moss – the stars come in droves when Kim Jones shows his latest creations for Dior. This year’s show, which featured the already highly coveted collab between Dior and Nike Air Jordan, also attracted crowds of stars and influencers and caused a huge stir at the fashion show. The fashion blogger Loïc Prigent was also there again and presents exclusive insights of the spectacle in his video.

The Victoria Secret Angel Romee Strijd is not only an international supermodel, but also a successful youtuber with over 1 million subscribers. The 24-year-old Dutch woman is part of the Dior family and can be seen in many campaigns and on the catwalks of the luxury brand. In many vlogs Romee takes her fans on an exciting life as a top model – in the following video the model also has her camera with her and shows her trip to Paris, where she is part of the Dior fashion show.

She is considered the most successful influencer in the world – Chiara Ferragni. The Italian is known worldwide and is herself an entrepreneur with her own fashion brand. The 32-year-old is also a huge fan of Dior and naturally chose the French luxury label for her wedding dress. Vogue accompanied Chiara Ferragni exclusively during the fitting for the wedding dress.

Hardly any other high fashion brand dares such extraordinary collaborations as Dior and has such a great success. From Japanese illustrations, to German suitcases, to basketball sneakers, the French one already had a lot going for it and created mega cool designs.

Hajime Sorayama is a Japanese illustrator and world famous for his robot drawings and paintings. In cooperation with the fashion house Dior, the 73-year-old created an exciting men’s collection that caused a huge hype and sold out in no time. The collection can be seen in the following video of the Dior Homme Pre-Fall 2019 show in Tokyo.

German suitcase company and French haute couture house?! Doesn’t really fit together that well, but the luxury suitcase manufacturer Rimowa and the fashion house Dior proved the opposite. Kim Jones, the chief designer of Dior is a huge fan of aluminium suitcases and combined them with high fashion. Out came shoulder bags and suitcases in cool designs, which Dior showed at their Men’s Summer 2020. The exciting collaboration was a great success.

There was a lot to see at the Dior fashion show in Miami this year … but one was awaited with particular excitement – the Dior X Air Jordan Sneakers. The model is a quasi classic Air Jordan, by the way one of the most sold sneakers in the world, with accents of the French noble brand Dior. The model is not yet for sale, but despite a price of about 1,800 Euros, it is eagerly awaited and will probably be sold out within a short time.

Designers like Kim Jones or Raf Simmons are the people behind the creative ideas in the Dior collections. Both did, or rather did a mega job for Dior. In three exciting videos, they give an insight into their work and life.

Loïc Prigent inspires thousands of fashion fans with his fashion blogs in interview format on his Youtube channel. At the Dior Show in Paris 2018, the Frenchman was there again and let the audience participate when stars like Robbert Pattinson, Victoria Beckham, Rita Ora or supermodels like Kate Moss and Bella Hadid are guests at Kim Jones’ breathtaking show. The blogger gets some of the celebrities present in front of the camera and gets short but interesting interviews with them.

For some years now, the Briton Kim Jones has been revolutionising the Dior label with his designs and reaching a new, young target group in particular for the French luxury house. Kim Jones turned the clothes into wearable couture for many people, which can also be seen on the streets off the catwalk. Supermodel Naomi Campbell, who is a long-time friend of the designer, interviews him on behalf of British Vogue and manages to give the viewer a super interesting insight into the work and life of Kim Jones.

From 2012 to 2015, the Belgian designer Raf Simons was the chief designer for Dior’s women’s prêt-à-porter and women’s haute couture and managed to achieve a sales growth of up to 60%. The designer talks about his beginnings and his exciting time at Dior in a worthwhile interview for Business of Fashion.

The most frequently asked questions and answers about Dior

With such a unique and popular brand, it is clear that some questions arise. You can find the three most popular questions and answers here:

When was Dior founded?

The Dior brand was created on 16 December 1946 in the Avenue Montaigne in Paris.

Who is the designer of Dior?

Dior is fully owned by the French luxury group LVMH.

You can find more about Dior here: