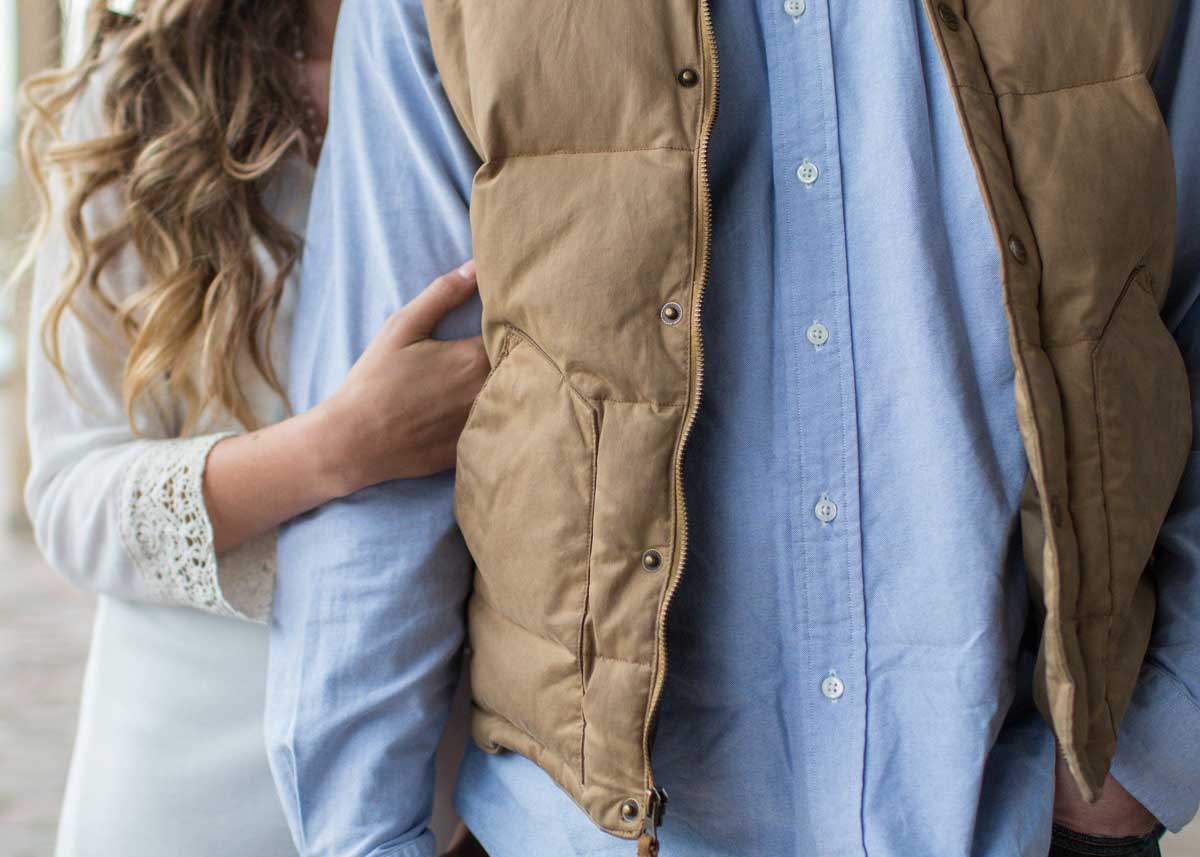 Moncler – a brand that has developed from a French mountaineering outfitter to one of the largest Italian high-end fashion companies and has been delighting luxurious customers from all over the world with its designs and innovations for almost 70 years now. Influenced by the iron temperatures of the French Alps, Moncler today combines exclusive designs with high-quality comfort.

Founded in 1952 by René Ramillion in Grenoble, France, he initially produced equipment for mountain expeditions. His products achieved rapid success and Ramillion expanded his range to include the company’s current flagship, the down jacket. Only a short time later, the young people of the Italian upper class in Milan discovered the voluminous down jackets for themselves and made them into a must-have. In 2003 Remo Ruffini, who owned his first Moncler down jacket at the age of 14, bought the company and transformed the traditional French company, which was in crisis at the time, into one of the biggest Italian luxury fashion brands.

No product of the Italian luxury brand embodies the brand DNA more than the down jacket. Once a means to an end to protect mountaineers from the icy cold during mountain adventures, it became the flagship and probably the most sold product of the Moncler brand. Initially weighing just under one and a half kilos, it is now featherweight at 150 grams and is a comfortable and warming fashion piece popular with prominent fashion icons such as Naomi Campbell, as well as with customers with high purchasing power from all over the world.

The Italian luxury fashion group Moncler has revolutionized and abolished itself, as well as the basic concept of the fashion world, to publish two to four collections a year. With the project Genius, it is taking a unique and innovative step in the fashion industry. The brand collaborates with up to 10 different designers each year and brings new capsule collections to the market throughout the year.

Since 1943, fashion shows have been held in the world’s fashion capitals by the most important designers. The presentation of the latest fashion creations is of course in the foreground. However, the entertainment aspect is playing an increasingly important role and fashion shows are becoming huge spectacles that millions of viewers follow on social networks like YouTube or Instagram. Also Moncler could already cause a stir in the past with his shows and put extraordinary fashion shows on the legs. Three of the probably most worth seeing fashion shows can be found here.

Moncler’s Grenoble Autumn/Winter 16/17 fashion show is probably the most spectacular show of the Italian luxury brand. From nowhere, about 80 athletes dressed in blue uniforms appear at the beginning of the show and offer the audience a perfectly choreographed performance, as known from American college sports events. The stomping of the men creates a military sound throughout Lincoln Center – the audience is fascinated. After a few minutes, the models enter and run to the beat of the marching sounds. A truly unique and unprecedented fashion show, which caused admiration from both the audience and the rest of the fashion world.

In an autumnal forest location at the Grand Palais in Paris, Guambattista Valli shows his autumn/winter Haute-Couture Collection for Moncler. The music and the ambience of the show let you feel the vibe and also the audience of fashion fans, influencers or customers obviously enjoy the show. Especially feminine shapes, paired with male garments and decorated with roses and leaves make this collection a real highlight.

“Back to the roots” at Moncler’s Spring/Summer 17

With the Gamme Bleu Spring/Summer 2017 fashion show, Moncler takes its audience out into nature for a camping holiday. Inspired by the company’s beginnings as a camping and mountaineering fashion company, the luxury house created an exciting collection with an equally exciting show. The setting is reminiscent of a campsite and the show begins with people dressed as teddy bears patrolling the campsite. Extraordinary for high fashion, but unique and special. The guests of the show were thrilled and Moncler caused quite a stir with this show.

Marketing and advertising are important aspects of fashion to stand out. Moncler likes to stage its fashion in special and extraordinary campaigns and reaches its audience in a spectacular way. Two campaign highlights of the luxury brand can be found here…
This advertising campaign of Moncler shows the spectacular ski slope of Grenobles, the place of origin of the Moncler brand and leaves the spectator breathless when …….. presents his daring stunts. Moncler stands for high quality and design – especially winter sportsmen love the down jackets and winter accessories of the luxury brand!

Moncler Ski – Campaign in the desert

In the campaign CARAMEL LAND of the noble brand Moncler, two friends take the spectators on an exciting and extraordinary ski tour. Armed only with a mobile phone, the two of them film themselves in a breathtaking setting in the middle of the desert and let you be part of their unique experience up close. Definitely an interesting and varied campaign, which has never been seen before at other luxury brands!

Collaborations – hype between luxury and streetwear

Moncler was one of the first luxury brands to take up the hype about collaborations and completely revolutionized the concept of classic fashion shows. Since 2018, the Italian fashion house no longer organizes fashion shows, but goes a new way with the project GENIUS. Every year they collaborate with up to 10 different designers from all branches of fashion and release capsule collections, some of which are limited editions, throughout the year. The hype and success behind this idea is enormous and fashion lovers compete for the coveted pieces.

Hiroshi Fujiwara – the Japanese is especially known during the Millenials and among music fans a little legend. The former Hip-Hop Dj not only inspires a young target group with his label Fragment, but also created a streetwear collection together with the Italian luxury house Moncler, which caused a huge sensation among his community. The video for the campaign shows a young man jumping through different time zones in a futuristic world. Together with the background music of the Japanese, this allows the viewer to dive into another world and experience the spirit of Fujiwara first hand.

The clip gives an insight into the probably most sought-after collaboration of the brand Moncler – with none other than the Italian streetwear brand PALM ANGELS. No matter if Rihanna, Kanye West or Jay-Z, nobody who doesn’t love and almost idolizes the label. The collection includes eye-catching colours and crass design effects, as well as graffiti prints on down jackets or bags full of colourful moncler logos. The fashion fans were thrilled and within a very short time Pieces, like the pink jacket from the campaign, were sold out. Moncler X Palm Angels – probably one of the most exciting brand collaborations of the last years!

Moncler’s collaboration with the Valentino designer Pierpaolo Piccioli is as fascinating as it is shocking. The clip of the campaign shows models in ball gowns walking around a chic hall – but they don’t wear conventional couture dresses as known from Valentino, but down dresses in eye-catching colours and patterns. Whoever sees the collection for the first time will certainly be amazed, possibly startled. Also in the fashion world the creations caused a sensation, but stars like the actress Ezra Miller or the model Liya Kebede already wore the dresses on the red carpet and provided a real eye-catcher.

In times of social media, many luxury brands reach young target groups primarily through platforms like Instagram or YouTube. Of course, many of the big fashion houses rely on influencers or celebrities with a huge reach. Moncler also uses the influence of these and has worked with popular and successful influencers. To the Genius Launch Party the fashion house invited no less than Milly Bobby Brown, one of the hottest idols of the youth. But also Will Smith, one of the most famous Hollywood stars was a guest at the party and took his more than 8 million YouTube followers with him. Also the cooperation with popular models like Lucky Blue Smith of course caused a lot of attention, so Moncler decided to book him for his F/W 15/16 campaign and let the fans participate with “Behind the Scenes” shots.

Millie Bobby Brown is the shooting star and at the latest since her role as an elf in Stranger Things she is known worldwide. With millions of fans, especially on Instagram, she is a welcome and important guest at fashion shows or as an advertising face. Moncler knew how to take advantage of this and invited the 16-year-old to the Moncler Genius Launch Party, where she caused a huge stir and here in a short interview with Derek Blasberg she talks about her favorite collaborations of Moncler. She is wearing one of the exclusive down jackets of the Moncler X Palm Angels collection herself.

Lucky Blue Smith, one of the most famous and successful male top models of recent years, shows himself here in icy surroundings during a campaign shoot with his sister Pyper America Holder for the luxury label Moncler. In the clip you can see footage from the campaign shoot and the audience gets an interesting insight into the production. They will be initiated into the story and can look behind the scenes how the siblings work together.

Will Smith is not only a Hollywood star, action hero and singer – no, the 51-year-old has been a successful youtuber for several years now and takes his more than 8 million fans on his vlogs to his private holidays or to events such as the legendary Coachella Festival. As one of the celebrity guests at Moncler’s Genius Launch Party, Will Smith once again took his camera and gave a personal insight into his trip to Milan. He was visibly impressed not only by the collection itself, but also by the spectacular presentation and location of the Italian luxury label at the launch event. The video is not only very entertaining, it also gives fashion fans a rather rare glimpse behind the scenes of a fashion party and lets you understand why the superstar inspires so many people.

Interviews – up close and personal with the designers

Many fashion fans are interested in the background of the collections and are happy to get a deeper insight through interviews with the designers. Because often personal experiences or memories of the designers are the inspiration for the collections. Also chief designer Thom Browne or Francesco Ragazzi told in really worth seeing interviews about their work with Moncler and gave the fans the opportunity to learn more about their collection…

The American fashion designer Thom Browne created a collection for Moncler and presented it in an impressive show reminiscent of a Star Wars invasion, making it a highlight of New York Fashion Week. Inspired by the Navy and Art Nouveau, Browne’s main goal was to create entertainment for the audience. The show aspect of fashion is especially important and he managed to convey this in a unique way in his fashion show – the guests were thrilled by the special presentation.

In this video, founder of Palm Angels Francesco Ragazzi talks about his exciting collaboration with Moncler and gives interesting background information about the collection. The New York flagship store of Moncler already shines in the style of the collection with cool graffiti and special designs and makes this a real experience. Main inspirations are the art scene and especially the eccentric art style of the artist Jeff Koons and other exciting directions about which Ragazzi talks in the video…

The most interesting questions & answers about Moncler

Where does the Moncler company come from?

Moncler comes from the French town of Monestier-de-Clermont.

When was Moncler founded?

In which country does Moncler produce?

Moncler has factories in many European countries. The majority is produced in Romania, Armenia, Bulgaria, Moldavia, Hungary and Georgia.