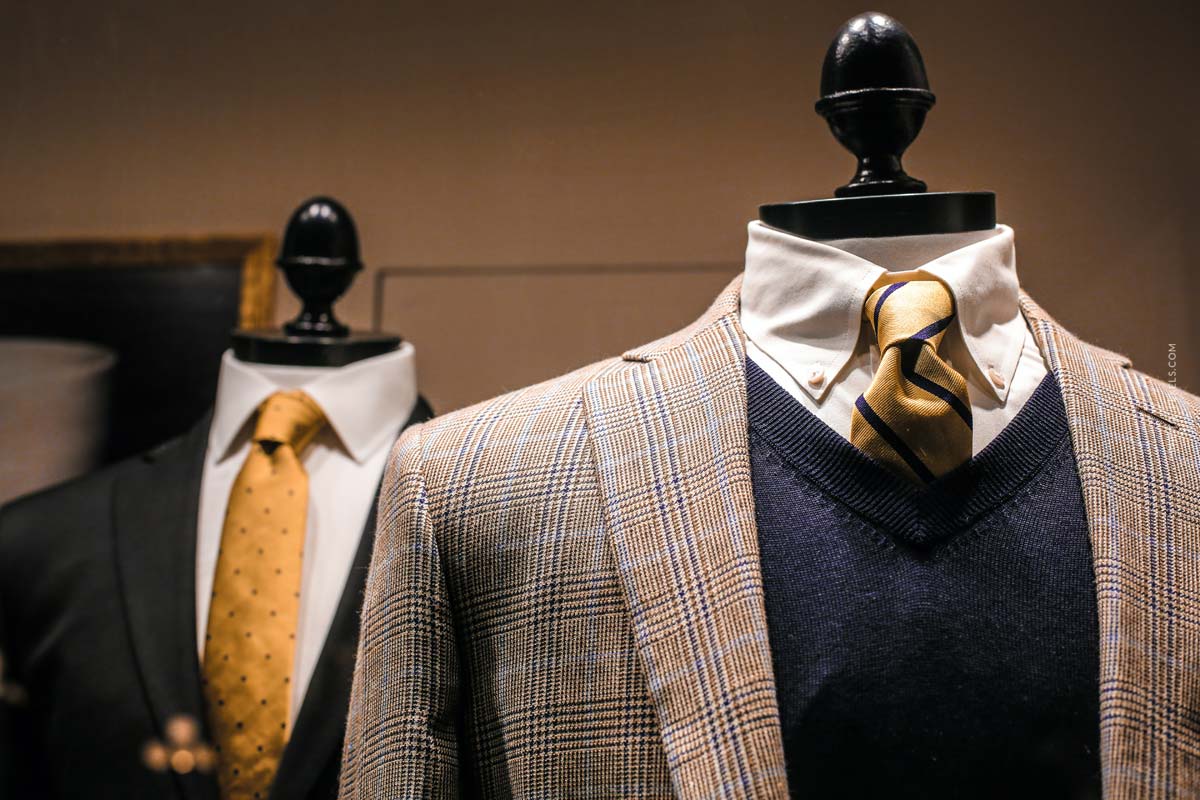 Paul Smith – Designer Sir Paul Smith is the most famous knight in the fashion world and is one of the most successful fashion designers in the British area. He is the chief executive, designer and major shareholder of his eponymous brand Paul Smith. His philosophy “you can find inspiration in everything” is the guiding principle behind his company. The designs he creates are electric and at the same time allusions to music, art and everyday life. There are also repeated allusions to cycling, but more on that later.

More often than not, he is also called Mr. Stripes, as he elegantly combines wild pattern and color combinations with classic shapes like no other.

Paul Smith Ltd. – In 1970 he founded Paul Smith Ltd. and opened the first fashion store in Nottingham. Through his girlfriend at the time, who is now his wife, he came into contacts in the design and fashion industry, which led him to create his very own fashion. Today there are 130 Paul Smith fashion stores in over 60 countries worldwide.

50 years – 5 decades of design expertise goes into making Paul Smith products. This experience is reflected in everything that is made, from sophisticated, relaxed tailoring for men and women to casual sneakers and junior pieces for children. But Paul Smith’s range also includes furniture and accessories. However, Paul Smith is best known for its men’s suits and collections. Even the Prime Minister dresses in his suits.

Tips for men from a professional

A suit must fit well! Sir Paul Smith shares his tips to avoid fashion faux pas for men. What should you do and what should you leave off? Check out his checklist here.

Paul Smith’s 2016 suit collection is tailored for men on the go. The designer shows you here how to wear a Paul Smith suit for traveling properly.

This is the logo of Paul Smith. It is a simple, plain lettering of the name of the designer or the brand.

Paul Smith: “My career was an accident”.

The beginning – Paul Smith had very different dreams in his childhood. He was born in Nottingham in 1946 and wanted to become a professional cyclist as a child. At the age of 12, Paul joined a cycling club in his town. At the age of 15 he dropped out of school and just two years he crashed in a traffic accident. This caused him to spend six months in the hospital, so he quit cycling. Through this accident he began to deal with fashion.

Paris – Thanks to his wife he got contacts in the fashion world, which motivated him to create his own fashion. In 1970 he founded his fashion company Paul Smith Ltd. At that time he was just 24 years old. And only seven years later he got the chance to present his menswear collection in Paris for the first time.

First collection – His colorful and eccentric designs were a great success. His first women’s collection followed in 1993, and in addition to various awards, his knighthood from Prince Charles for services to British fashion in 2000 is probably his highest honor. He is still a big fan of cycling today.

The road to success

In this video, Sir Paul Smith talks about his journey and how he created a name for himself together with his wife.

Paul Smith reflects on the last 50 years with WWD while allowing a little sneak peek from his office in Convent Garden.

What’s behind his work?

He talks about his work, what all goes into it, his sustainable products, how he finds inspiration in everything and how this influences his work.

Expansion in over 60 countries

Paul Smith is a company with a global perspective. It all started in a small store in Nottingham, England. Today there are 130 stores worldwide in over 60 countries. Find out more about what a Paul Smith store looks like here.

In September 2013, a new fashion store opened in London. Even the facade of the store is a real eye-catcher: a black facade with iron elements. The store is divided into women’s fashion, men’s fashion and shoes. The ambience, where the women’s fashion is located, is reminiscent of the art history Mayfair. Shoes are displayed in front of a wall decorated with dominoes. In the men’s fashion area, many bronze and wooden elements were used.

No Paris Fashion Week without him

In 1977 Paul Smith presented his men’s collection for the first time in Paris. Since then, there is hardly a Paris Fashion Week without him.

The mood for the season was set by brutalist architecture over contemporary art galleries. This casual collection redefines the 80’s dress code with airbrushed prints, sleek silhouettes and a blurred color palette. Check out what will be worn next spring and summer here!

Collaborations have always been part of Paul Smith’s business. This has allowed the designer to pursue many of his interests and further expand his creativity. His cooperation partners include car brands MINI, Land Rover Defender and soccer team Manchester United.

Paul Smith and MINI have worked together many times before. Two months ago, Sir Paul Smith electrified a classic piece of MINI heritage. Following his vision, he wanted to recharge a classic Mini with a focus on sustainability, quality and functionality. The result: MINI Recharged Paul Smith.

Land Rover Defender: In the wilderness

Together with Land Rover Special Operations, Paul Smith designed a Defender in 2016 according to his ideas and wishes. This Defender drives through central London with 27 different exterior colors. For this design, he says, British nature gave him inspiration. Take a look for yourself!

Paul Smith has been working with the soccer club since 2008. Paul Smith equips the team, the officials and the coaches with tailor-made suits, shirts, ties and shoes to travel to their matches, tailored exactly to their wishes and needs. But it’s not just suits that are the focus of the collaboration; over the years, a limited collection of merchandise has also been produced, including socks, wallets, bags and more.

Where does Paul Smith produce?

All of Paul Smith’s productions are designed in the UK.

What is the iconic signature pattern of the Paul Smith brand?