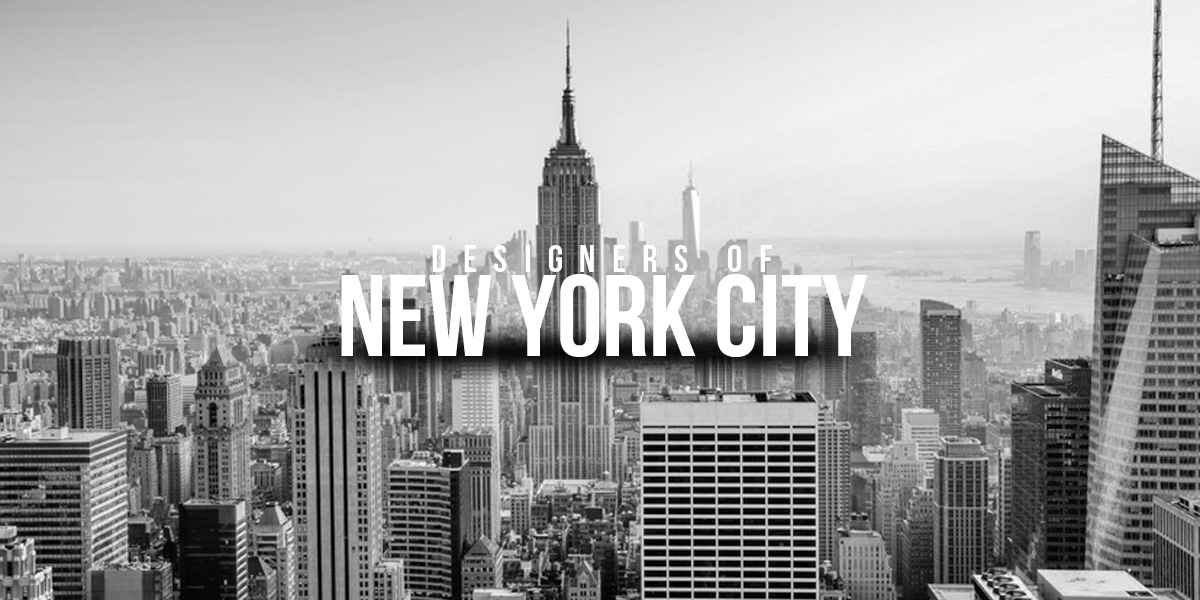 New York is one of the ultimate fashion metropolia worldwide. Fashion and Style are as diverse as the big apple itself, from urban street style to indie or high fashion there is nothing you can not find in New York. Also, one of the most famous design schools are based in New York: Parsons The New School of Design, world best designers like, Anna Sui, Tom Ford or Alexandra Wang, graduated from the Parsons School of Design in New York. Even if you did not study in New York, it seems like real New Yorkers are just born with a huge sense of fashion. Let’s take a look at New York established and new designers.

Vera Wang was born on the 27 of June 1949 in New York City and is a very successful American fashion designer of Chinese descent. She is most famous for her extravagant garments, but especially for her unique wedding dresses. Vera Wang attended The Chapin School in Manhattan and then studied at Sarah Lawrence College and in Paris and graduated with a diploma in art history. She worked for the fashion magazine Vogue for 16 years and joined the Ralph Lauren Corporation in 1985, where she worked as a design director for 2 years. In 1990, she opened her own fashion studio at the Carlyle Hotel in New York City. She designed wedding dresses for celebrities like Mariah Carey, Jennifer Lopez or Victoria Beckham, Heidi Klum.

Donna Karan was born in 1948 in New York City and is a real fashion pioneer and one of the first woman designing for women. Modern, forward-thinking and confident. With her first collection in 1984 “Seven Easy Pieces”, she revolutionized the way women dress. A bodysuit, a tailored jacket, a skirt, pants, a cashmere sweater, a leather jacket, and an evening look, a collection to simplifying a women’s life. When Donna got older and her daughter too, she found new problems which needed to be solved: a teenage daughter robbing her closet and that’s how DKNY was founded in 1989.

Calvin Klein – Love Your Calvin’s since 1942

Calvin Richard Klein was born in 1942 in the Bronx of New York City and is one of the biggest American fashion designers. He is a son of Jewish immigrants and graduated the High School of Art and Design in Midtown Manhatten in 1960 and studied at the Fashion Institute of Technology in Chelsea, Manhatten in 1963 with a graduation in fashion design. Before he founded the clothing Company “Calvin Klein” in 1967 he freelanced for other fashion houses in New York. He exhibited his first small collection in 1968 and got his first order from fashion house Bonwit Teller. After that, he quickly made a name in New York fashion scene and won many fashion prices. 2003 he sold his company and lives in Southampton.

Tory Robinson was born on the 17th of July in Valley Forge, Pennsylvania and is an American fashion designer and businesswoman. She grew up in the family of a businessman and an actress of Jewish origin on a farm in Valley Forge. She studied art history at the University of Pennsylvania. She changed her name after she was married to entrepreneur Christopher Burch for the second time from 1996 to 2006. Tory began her work in fashion design in New York City, where she initially worked for Harper’s Bazaar, Vera Wang, and Polo Ralph Lauren. Her own label, TRB by Tory Burch was founded in 2004. Her company grew to include more than 120 Tory Burch stores and one flagship store each in New York, Los Angeles, London, Rome, Tokyo, Seoul, and Shanghai, as well as e-commerce sites in seven languages. The brand is represented in over 3,000 stores worldwide. Her company’s sales in 2013 where about one billion dollars.

Michael Kors was born on the August 9th 1959 in Merrick on Long Island, New York and ins actually called Karl Anderson Jr., Kors is the surname of his stepfather. Kors founded his own label in 1981 before he even started his design studies at the “Fashion Institue of Technology” in New York City. Parallel to his studies, which he later broke off, he worked in a New York luxury boutique called Lothar’s as a sales manager and presented his first collections there. His first fashion show was in 1984. He made a name for himself with minimalist, American sportswear in classic cuts and fine materials. In the 1980s, he also worked for the Scottish cashmere brand Lyle & Scott as a designer. After a first failed attempt to establish a cheaper second line called Kors with an Italian licensee, he restructured his company in 1993 and began a design and license collaboration for the second line Kors with the Japanese fashion company Onward Kashiyama, the later owner of the fashion brand Jil Sander. In 1999, the French LVMH group bought 33% of Michael Kors. As early as 1997, LVMH appointed Kors Chief Designer of the group’s Paris-based fashion label Céline; a position he should hold until 2003.

Diane von Fürstenberg – The Founder of the Wrap Dress

Diane Simone Michelle von Fürstenberg was born on December 31st, 1946 in Brussels, Belgique. Diane studied Spanish in Madrid and Business Administration at the University of Geneva, where she also met Egon von Fürstenberg for the first time. In 1969, they married in Yvelines in France and moved to New York, where they became very popular in the scene. Diane von Furstenberg was portrayed by Helmut Newton, Andy Warhol, and Francesco Clemente and also took part in the party luxury life in Studio 54. At the same time, von Furstenberg began to build their own business, so as not to be dependent on the father or her husband. She sold colorful printed jersey dresses and in 1974 she released the so-called wrap dress, which proved so stylish that today a copy is exhibited at the Metropolitan Museum of Art in New York. In 1985, she temporarily withdrew from the fashion business and founded the publisher Salvy in Paris. In 1997, she returned to New York for a second career as a fashion designer. Diane von Furstenberg also brought out a cosmetics series and in 1991 in the home shopping business. Founded in 2007 in a studio in Greenwich Village and since then in the Meatpacking District, Von Fürstenberg still designs an exclusive women’s collection, which is only offered in high-end boutiques and fine department stores such as Bergdorf Goodman or Saks Fifth Avenue.

Ralph Lauren was born on the 14th October 1939 in the Bronx of New York City and is an American fashion designer and founder of the fashion label Ralph Lauren Corporation. He went to the De Witt Clinton High School and earned his first money with selling ties to other students. With the age of 12 he invested his earned money in expensive suites. 1957 he graduated and decided on change his last name from Lifshitz to Lauren. Lauren has never completed a training as a fashion designer. After his time in the army, he worked as a salesman at the fashion house Brooks Brothers. In 1967, a $ 50,000 loan from fashion retailer Norman Hilton enabled him to design his own cravat collection under the Polo label. In the same year, he acquired the rights to the brand from Brooks Brothers and became self-employed. In the future, Lauren not only focused on neckties but designed complete collections for men. In 1970 he won the Coty Award and began to create women’s collections the following year. In 1972 he was commissioned to design the clothes for the movie The Great Gatsby. In the same year, he put on a polo shirt in his own collection, which he provided with the polo player on his chest that can be found today on almost every Lauren product. The model is still one of his most successful creations.

Hood by Air is a high fashion streetwear brand which was launched in 2006 by Shayne Oliver, who was a former student at the “Fashion Institue of Technology”. He describes his fashion as “Ghetto-Gothic”, which is influenced by Tommy Hilfiger or DKNY. Complex named him to one of the 25 greatest black fashion designers. Celebrities like A$AP Rocky, Kanye West or Rihanna collaborated with Hood by Air.

Thomas Jacob Hilfiger was born 1951 in Elmira, New York and is an American fashion designer. Hilfiger’s logo is inspired by his monogram in the flag alphabet. He made the revival of the 1970s college style and applies with his jackets and shirts in vintage style as a pioneer of All-American style. Hilfiger went to the high school Elmira Free Academy. His parents wanted him to become an engineer. However, Hilfiger decided in 1969, at the age of 18, to trade and against another school career. He bought jeans and breeches in New York, which he changed according to his ideas and then resold in Elmira. Together with two friends and $ 150 each, he opened the boutique People’s Place in his native Elmira. The store developed into a gathering point for the young Elmira. After seven years, People’s Place had to close by the changes in buying habits, caused by the emergence of large shopping centers. Hilfiger now focused more on designing the clothes and moved to New York with his then-wife Susie Hilfiger. Although he was insolvent, he refused offers as a design assistant to Calvin Klein and Perry Ellis. In the early 1980s, Hilfiger met Mohan Murjani, who was licensed by Gloria Vanderbilt Jeans. This supported Hilfiger shops, but later also went bankrupt. Hilfiger managed to buy back the company with the help of friends. In 1985, he founded the Tommy Hilfiger Corporation and brought out clothes under the brand name Tommy Hilfiger for the first time.

Tom Ford – Inspired by Calvin Klein, now Inspiration for others

Ford was born in Austin in 1961 and spent his childhood in Santa Fe, New Mexico. After graduating high school, he enrolled at Simon’s Rock College, Great Barrington, near Pittsfield, Massachusetts, at the age of 17, but dropped out after one semester. Ford began studying architecture at the Parsons School of Design. His year abroad, he graduated in 1985 at the French branch of Parsons School of Design in Paris, where he also received an internship at Chloé. For his final year of study in New York, he took all his electives in fashion design but graduated in 1986 with a B.A. in Environmental Design. Ford’s goal, however, was to become a fashion designer, like his big role model Calvin Klein. On November 4, 2003, Ford announced its commitment to the Gucci group to end April 30, 2004, and took a one-year break. Together with Domenico de Sole as CEO, he founded his own fashion brand Tom Ford International, LLC in April 2005 in New York.

Want to see more? Check out designers of Los Angeles.