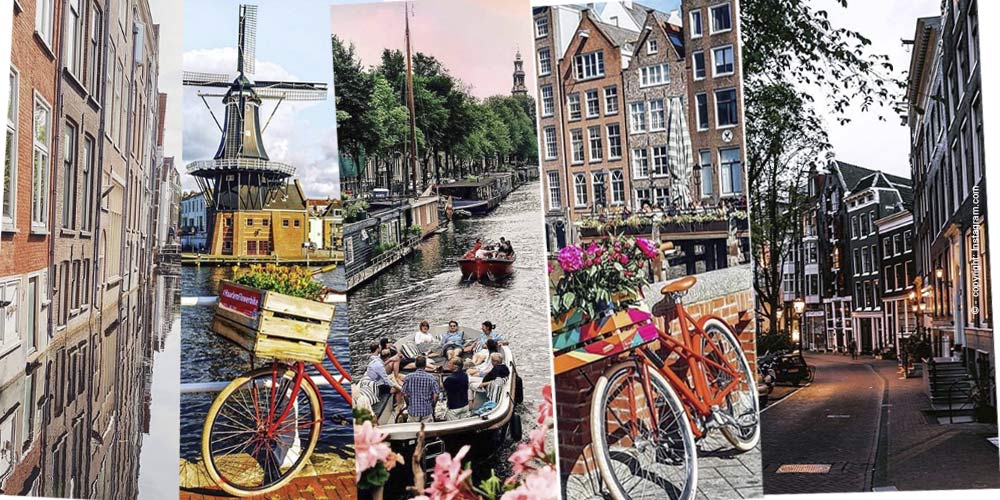 You’re in the Netherlands right now or you’re going there soon, but you don’t know yet which cities you’ll see and want to see? Or do you already know that you will be in a certain city, but have no idea what to do there and where to find delicious food? We’ve rounded up the hottest cities in the Netherlands and what you need to do there. Although Amsterdam is of course a must, you’ll see that there are plenty of exciting alternatives.

Because we want to approach the matter a little more unusual, we call here also Rotterdam before Amsterdam. Not because the city is better or more beautiful, but simply because it can easily keep up with Amsterdam. And yet it is usually only mentioned in second place. Rotterdam is sometimes said to be the ‘Manhattan on the Meuse’ and those who have been there know why. The cityscape is dominated by an impressive skyline (the only one in the country), which you might not expect from the Netherlands. As a result, the city has even something more urban than Amsterdam. New York fans should love it here. But Rotterdam is not only characterized by modern architecture, the city is also as a port city, party city, artist city and above all shopping paradise. A particularly stylish place to shop is Groos, a store at the foot of the Luchtsingel – a stylish pedestrian bridge. Here you can admire and buy local designer products. If you’re into vintage, Rotterdam should also be your city. If you only have time for one shop and don’t have time to try on clothes, you should stop by North Sea Design, which you can also find at the Luchtsingel (more precisely at its end). There’s a lot of beautiful vintage jewelry here for fair prices. Due to the culinary influences from all over the world, you will also find a lot of good food in Rotterdam. If there was one address we could visit, we would probably choose “In de keuken van Floris”. There’s no traditional menu here; instead, you order a 9-course meal and are served wine, juice or champagne to match. Vegetarians are also more than welcome (if booked in advance). Go for the experience, it’s worth it!

Of course, it would be a travesty if we simply withheld Amsterdam from you and left the capital of the Netherlands off this list. However, it is quite simple that numerous guides already exist, in which various good tips can be found, what can be experienced in the beautiful canal city. And we have also dedicated a separate article to the possibilities alone for an extravagant and delicious breakfast in Amsterdam. So we’re going to limit ourselves to one thing at this point and present you the top 5 best places in Amsterdam to snap a new photo for your Insta profile or just your memory box or holiday album. Best of all, you can do them all in one day.

Eindhoven is not only the city of technology in the south of the Netherlands, it is also the design capital of the country. No matter where you go in Eindhoven, you’ll find creativity, innovation and uniqueness that can only be found in Amsterdam’s hippest neighbourhoods. The annual Design Week in October is particularly worthwhile. During this week you can be present when new design talents are presented and the highlight is the Dutch Design Award. You can also take part in workshops and readings. At the Strijp-S, Eindhoven’s creative workshop, you can also meet a variety of creative people and discover beautiful, delicious and practical things in the former Philips production halls.

The best fries in the Netherlands – at least according to the ‘Frietopisten’, an independent association of lovers of the perfect fries – can be found at the “Friture Martin Zwerts”. Whether it’s fries with peanut sauce, breaded cheese or a bamirol as a side dish (a roll of, say, breaded Asian noodles or meat) – you’ll be blown away by the look and taste of the food. You can also find delicious food at “Snckbr”, a small restaurant chain in the Netherlands. For an average of 10€ you get, according to the concept, delicious, modern dishes with little fat and as little refined sugar as possible.

Close to the German border lies the beautiful city of Masstricht, which you can reach by car from Aachen in just 45 minutes. Besides the medieval architecture, beautiful parks and impressive churches, you will also notice the young flair of the already quite old city. Maastricht is a student city, which is why many international young contacts could arise. You can do some good shopping at “Concept” in the Rechtstraat in Maastricht. The whole street is considered the trendiest shopping street in “Wyck”, the district on the eastern bank of the Maas in the historic centre of the city. At Concept you will find beautiful vintage items and various stylish brands for sale. Women who want to spend a little more should also check out “Noir Maastricht”. From “Rains” to “Selected”, various current brands are represented. And if you are into second hand but prefer designer clothes, “Second 4 all” might be something for you. Here you will find exclusive brands in the upper segment at affordable prices. The store is extremely well-stocked and you can even browse for specific brands. Our top 3 places for delicious snacks in Maastricht are the following:

The last hip city on our list is The Hague, the most diverse city in the Netherlands, in our opinion. The Hague is located directly on the North Sea coast and gathers political clientele, beach vacationers and city lovers. You can enjoy the sea in The Hague in the Scheveningen district, where you will find one of the most beautiful beaches in the country. Next to the beach you will find the seat of government of the Netherlands and around it some of the most beautiful museums – including the Escher Museum. The best place for a stroll is the antique and book market, which is held in the Voorhout district every Thursday and Sunday from 10 am to 6 pm. And even if you’re more likely to find expensive clothes and other things in the “Passage”, the oldest covered shopping street in the Netherlands is also worth a detour. You’ll find delicious food at Suiderstrand, a chilled-out beach bar in Kijduin, just 100 metres from the beach houses. The cocktails here are also convincing. At “Juni”, a cosy café with a few outdoor tables right in the centre of The Hague, the vegetarian burger with quinoa and beetroot is particularly impressive. It’s best served with homemade lemonade. And if you’re ready to spend a little more money on a culinary experience after a museum tour of Scheveningen, invest it in a meal at Waterproef. One of the city’s best restaurants is located in the harbour and serves French-Mediterranean cuisine. Michelin critics also rave about the extensive wine list, which could hold a culinary discovery or two.