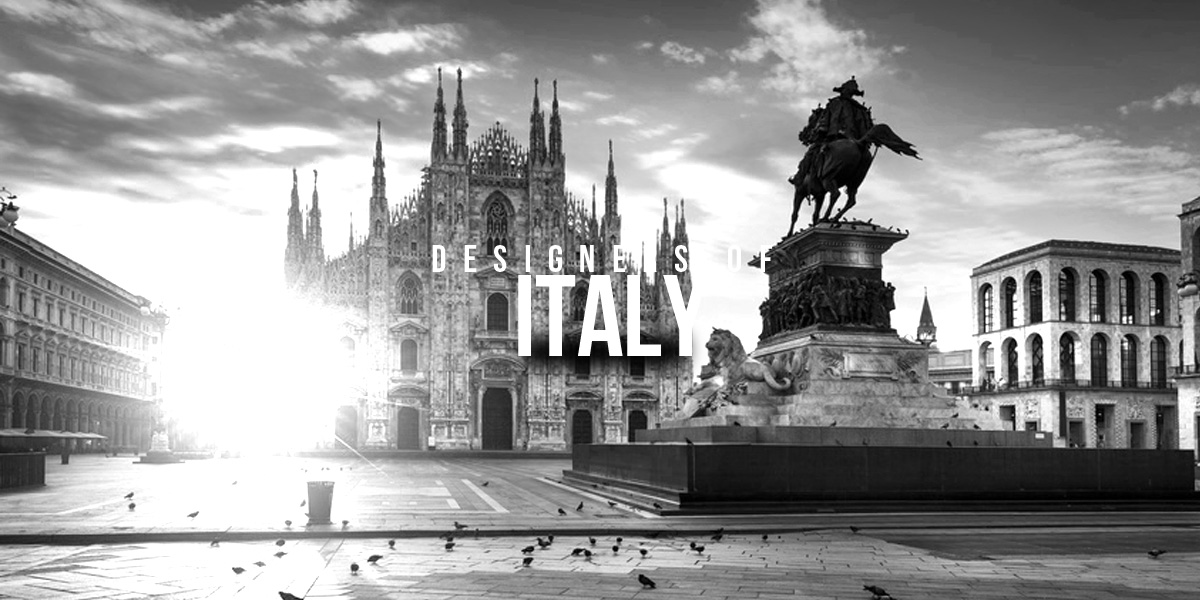 Italy got one of the world most known fashion capitals: Milan. Milan is next to Paris and London on of the hotspots for new trends, fashion, and styles in Europe and the whole world. The worlds most famous high fashion designers were born or started in the Italian city. The former production center is now part of the “big four” global fashion capitals and renowned for the pret-à-porter category of fashion. The Global Language Monitor declared Milan as the “fashion capital of the world” in 2009. Let’s take a look at Milan’s and Italy’s best designers.

Angelos Bratis – The Newcomer from Milan

Angelos Bratis was born in Greek 36 years ago and is currently living in Milan. He graduated from Amsterdam’s prestigious Fashion Institute Arnhem with an MA. In 2011 he won “Who Is On Next?”, the scouting project organized by Altaroma in collaboration with Vogue Italia. In January 2013, the British magazine “Wallpaper” suggested Bratis as one of the most prominent upcoming designers. Do not miss this new star in the fashion world.

Gianni Versace – The Legend behind the Medusa Face

Gianni Versace was born 1946 in Reggio Calabria, Italy and got murdered 1997 in Miami. In 1972 Gianni moved to Milan to work as a designer for Callaghan and the up-and-coming Genny brand, whose reputation he greatly helped. Three years later, he had great success in the US with his first leather collection for Complice. In the end, Versace finally became self-employed in 1978. In the same year organized the fashion retailer Albert Eickhoff in Lippstadt, Westphalia’s first major fashion show. In 1979 he had his first ready-to-wear show. In the same year, the first “Versace boutique” opened in Milan. He caused a stir with unusual material combinations such as silk/jute, leather/crepe de Chine. He was the first to put jeans on the catwalk. The main features of his fashion were bright colors and striking patterns. In the 1980s, Versace celebrated its international breakthrough as a fashion designer. Many creations of those years showed the face of the “Medusa” – it eventually became his trademark and later a part of the company logo.

Donatella Versace was born 1995 in Reggio Calabria and is the younger sister of Gianni Versace and the chief designer at Versace since his dead in 1997. In the mid-1970s she studied economics. On her free weekends, she visited her brother in his studio and after completing her studies, she shared an apartment in Milan with him. Originally, she wanted to do the PR work for Gianni, but he valued Donatella more as a muse and a critic. In the 1990s Gianni dedicated her the perfume “Blonde” and gave her the artistic direction of the young Versace label Versus. Her solo debut for Versace after Gianni’s dead followed with the screening of the spring collection of the main line in 1998. In July 1998, she hosted her first haute couture fashion show. Versace currently controls the productions and leads the fashion shows of the Versace label. To further make the brand known worldwide, she personally sings celebrities such as Jennifer Lopez or Lady Gaga.

Giorgio Armani – From Medicine to an International Empire

Giorgio Armani was born July 11, 1934, in Piacenza, Italy and is considered as one of the “greatest fashion designers of the 20th century”. He is the owner of 1975 founded fashion company Armani SpA, which operates in 60 countries and more than 2000 shops worldwide. After graduating in medicine, he worked as a window dresser, the as an exhibition arranger and finally as a fashion buyer and manager of the men’s fashion boutique La Rinascente. In 1966 he met his future partner Sergio Galeotti, built a design studio with him and worked for Ungaro and Zegna. A year later they founded the brand Armani which went from a small fashion business to an international fashion empire.

Roberto Cavalli – The Convivial and Imaginative Man from Florenz

Roberto Cavalli was born 1940 in Florenz. Already in Cavalli’s childhood, the convivial, imaginative and original side of his character became clear and he started to get interested in the relationship between fashion and painting. In 1957 he enrolled at the Academy of Fine Arts in Florence. In his own printing house, he ran material studies and experimented with new techniques. His thirst for research eventually led to his patent application for a revolutionary leather printing process in the 1960s, designing designs for other designers such as Krizia or Mario Valentino, and finally opening a small boutique in Saint-Tropez, where he created his own creations and offered his items for sale to prominent customers such as Brigitte Bardot. In the 1970s Cavalli created with the help of this technique, his first patchwork works that were well received in the time of hippie fashion and are still considered a classic.

Miuccia Prada was born in 1949 in Milan. As a 28-year-old Prada took over the family business for the production of luxury leather goods in Milan. The company was founded in 1913 by her grandfather and then continued by her mother, Luisia. Company founder Mario Prada and his wife Fernanda had two daughters. One of them, Luisia, married Luigi ‘Gino’ Bianchi in the 1940s, with whom she had three children: Alberto, Marina and Maria (Miuccia). Miuccia Bianchi took in the 1980s, the surname of her grandfather. Miuccia Prada is married to Patrizio Bertelli and mother of two children. She lives in Milan. The majority of the company Prada belongs to her and her siblings Alberto and Marina and her husband Patrizio Bertelli. She created there as a chief designer, the fashion collections, including the named after her nickname second line Miu Miu.

Guccio Gucci – From Elevator to Fashion and Jewelry

Guccio Gucci was born 1881 in Milan. As a teenager, master saddler Gucci worked for a while as an elevator operator at the Savoy Hotel in London. Through the daily contact with the wealthy hotel guests and their luggage, he slowly developed a sense of aesthetic fashion. In 1921 he started in Florence with a small shop for riding equipment, especially saddles. In 1947 he launched the production of fashion and jewelry, which he sold under the still-known Gucci label. After his death in 1953, his four sons continued the business: Aldo, Vasco, Ugo, and Rodolfo. He also had two daughters with his wife Aida Calvelli. The sought-after luxury label, the Gucci brand was not until the mid-1990s, when the since 1990 as a fashion designer at Gucci active and 1994 as successor to Dawn Mello ordered US designer Tom Ford, which from 1999, the ready-to-wear Lines designed by Yves Saint Laurent, received international acclaim for his work at Gucci.

Dolce & Gabanna was founded in 1985 by the Italian Designers Domenico Dolce and Stefano Gabbana. They both met in 1980 while they designed for the same fashion house in 1980. Two years later they built a designer consulting studio and became “Dolce & Gabanna”. Their first collection was presented in 1985 in Milan, a year later they opened their first store. First international recognition came when Madonna wore a gemstone corset and Dolce & Gabbana jacket at her premiere of Truth or Dare: In Bed with Madonna at the Cannes Film Festival in 1990. In 1993, the duo designed more with Madonna as 1,500 costumes for their international tour Girlie show to promote their album Erotica from 1992. In 1994, the company launched its second core product line – D & G, which appeals to a younger audience.

Adele and Edoardo Fendi launched “The House of Fendi” in 1925, ad a fur and leather shop in Via del Plebiscito, Rome. In 1946 the 5-second generation sisters, Paola, Anna, Franca, Carla, and Alda, joined the company. Karl Lagerfeld joined Fendi in 1965 and became the Creative Director for Fur and Women ready-to-Wear. Silvia Venturini Fendi (Anna’s daughter) joined Fendi in 1994 and is Creative Director for Accessories and Men’s lines. In 2001 the brand became a multinational luxury fashion brand and member of LVMH group.

Want to see more? Check out designers from France!